So, over the weekend, I was named Best Sportswriter in the “Untitled Sports Media Awards Project” at the Blogs With Balls Conference. No matter how many times you read over the previous sentence, it probably will not make any sense so just go with it. I’m not a big awards guy, but it’s always cool to win something, especially an award for best sportswriter on the Internet. I wrote a little acceptance speech, which was read by my colleague Richard Deitsch and went like this:

First off, I want to thank the Academy.

I wish I could be there to accept this award in person, but I am writing a book about Joe Paterno and so I am in State College watching Penn State play Eastern Michigan or Southern Michigan or some school from Michigan. Let’s be honest: I mainly need to stay here to make sure that Joe doesn’t get run over by another player.

I never expected to win this award because I generally don’t swear, and I suspected that swearing would be a requirement for being named the best sportswriter on the Internet. I don’t swear because I’m terrible at it, by the way. Every time I swear, I intend to sound like a character in a David Mamet play, but I end up sounding like Willis from the Jeffersons. At some point you have to know your place in the world. And my place is making outdated references to 1970s sitcoms and to not swear while doing it.

I love sports. I think that’s what sportswriting on the Internet is all about. There’s a connection between writer and reader on the Internet that goes beyond the printed page. There are comments, easy ways to reply, polls and video and audio embedded, arguments, agreements, feelings hurt, exclamation points, it’s a lot like talking sports in a bar. In some ways it’s even better than talking sports in a bar because there isn’t crappy music playing too loud and the drunk who is screaming “Yankees RUULLLLE!” is easily skipped over in the comments section. It’s not as good as talking sports in a bar, however, because the Internet does not offer beer. I expect Apple to fix that with their next version of the iPad.

The coolest part of all, however, was the award. My own muppet. Here seen in my editor’s office. My daughters will DEFINITELY want this one. 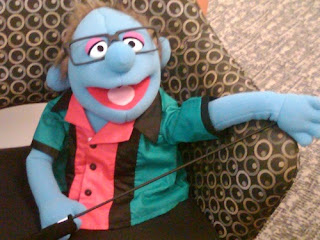